The Future of Business: towards a new relationship of technology and humanity (6 key findings by Futurist Gerd Leonhard)

We are at a pivot point: humanity will change more in the next 20 years than in the previous 300 years. Below are the 6 key challenges and opportunities facing society, business and governments in the next 10 years as a result of the exponential speed of technological development.

Note: this is a summarised version of my chapter from the book ‘The Future of Business’, see this page for the complete version, here to review or order the entire Future of Business book, and here for the audio and video versions of my chapter. Written by Gerd Leonhard, Futurist and Keynote Speaker, CEO of The Futures Agency (TFA), partly summarised by Magdalena Petryniak (many thanks!) 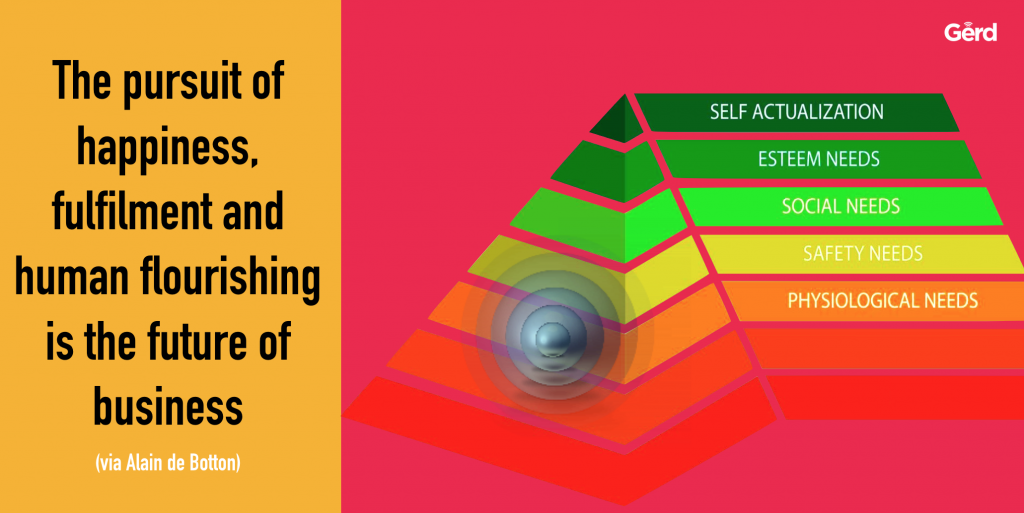 Remaining relevant, unique, purposeful, and indispensable in the future is obviously a key objective for every business (and every professional) everywhere, yet technology will no doubt continue to generate exponential waves of disruptions at an ever-faster pace. Soon – once technology has made almost everything efficient and abundant (just look at Spotify and the music business to see how that works) – I believe that we will need to focus on the truly human values of business, i.e. to humanise or better yet transcend technology and to move up Maslow’s needs pyramid, as people and as businesses. Successful business will no longer be about running a well-oiled machine or about great products at fantastic prices; rather it will be about uniquely furthering human flourishing. After all, the purpose of life is the pursuit of happiness (as the ancient Greeks keep telling us, see philosopher Alain de Botton’s great talk about this very topic)

Exponential and combinatorial: we’re at a crucial pivot point, at this very moment. 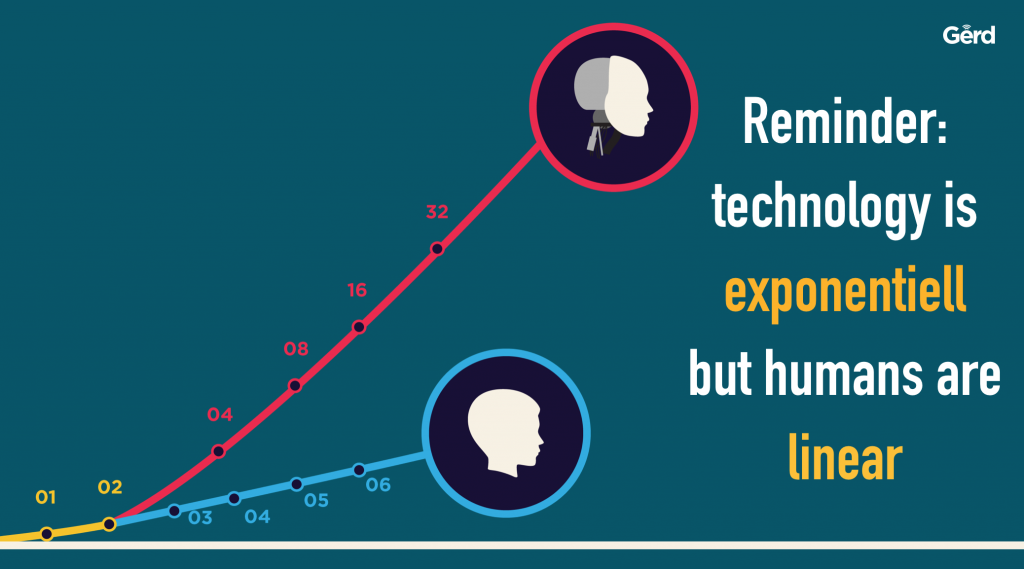 We are witnessing dramatic digitisation, automation, virtualisation, and robotization all around us, in all sectors of society, government, and business – and this is only the beginning. I believe these trends will continue to mushroom over the next decade as we head towards a world of over six billion Internet users by 2020, and possibly as many as 250 billion connected devices in the Internet of Things, such as sensors, wearables, and trackers. Beyond any doubt, machines of all kinds – both software as well as hardware or even wetware – will play an increasingly larger role in our future, and progressively more intelligent machines will impact how we live our lives at every turn. Venture capitalist and Silicon Valley icon Marc Andreessen already highlighted this phenomenon in a 2011 Wall Street Journal opinion piece entitled Why Software is Eating the World – a prescient headline that is certain to play out in force in our immediate future. We are already nearing the pivot point where very few ideas seem to actually remain in the realm of science-fiction for very long. This can be witnessed in areas such as automated, real-time translation (SayHi, Google Translate, Skype Translate) and self-driving and semi-autonomous cars (Google, Tesla, Volvo). The fiction-reality boundary is also being wiped out by recent developments such as the rise of intelligent digital assistants (IDAs) (Cortana, Siri, Google Now), augmented and virtual reality (Microsoft Hololens, Oculus Rift ) and the Internet of Things.

Technology: it’s no longer about IF or HOW but about WHY. 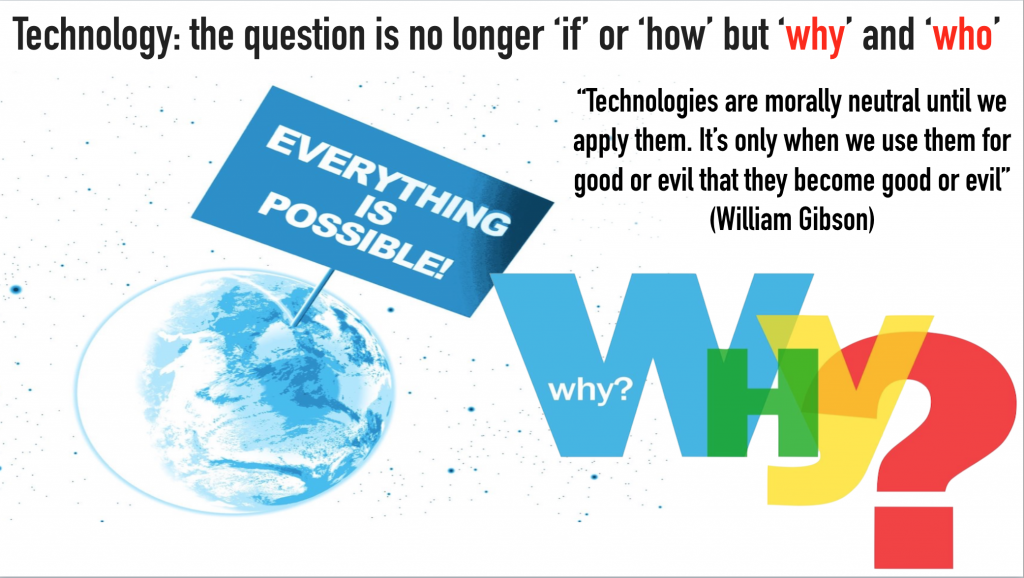 The urgent need for a new framework of  human+/-machine ethics is greatly amplified when we realise that we can stop wondering whether technology can actually do something (or not), but whether it should do something, i.e. the if or how is being replaced by the why  (followed by who, when and where). Specifically in regards to machine intelligence and deep learning, should we go boldly beyond mere deductive reasoning and allow smart software, robots, and artificial intelligence (AI) to advance to abductive reasoning, i.e. to go beyond their programming and to possibly open the door to some kind of recursive self-learning? Would this cause an uncontrollable ‘intelligence explosion’? If autonomous machines are to be a part of our future (already a certainty in the military), will we need to provide them with some kind of moral agency, i.e. a human-like capacity to decide what is right or wrong even if the facts are incomplete?  Where is this going? Destination transhumanism? 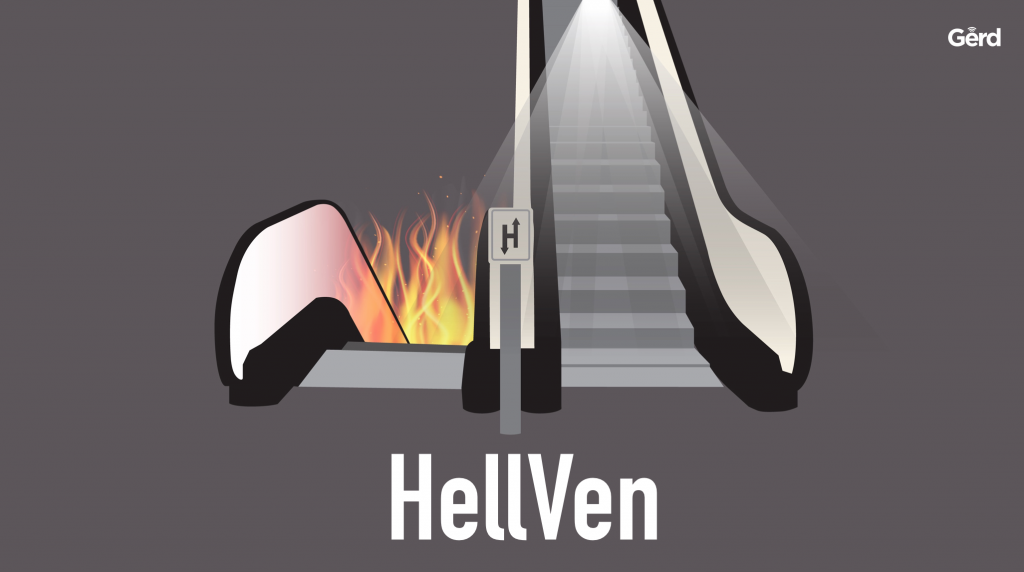 Tremendous scientific progress in computing, energy, transportation, water, environment, food and almost everywhere else can be expected in our immediate future. Most of this will have an overall positive effect on humanity, and hopefully on human happiness aka eudaemonia  (which I would suggest should be the ultimate goal) as well. This would clearly be the heavenly side of the coin. At the same time, on the more dystopian or hellish side we are now approaching a series of complex intersections at very high velocity. Soon, every single junction we navigate could either lead to more human-centric gains (again, loosely defined as ‘furthering human flourishing’) or result in serious aberrations and grave dangers. It has often been said that, “technology is not good or evil – it just is”, but it is now becoming clear that the good / bad part will be for us to decide, every day, globally and locally, collectively and individually. Clearly, if we assume that machines will be an inevitably larger part of that future, we will need to decide both what we want them to be, and perhaps more importantly, what we want to be as humans – and we need to do it soon, and collectively.

Artificial Intelligence (AI) is doubtlessly the most significant “hellven” challenge 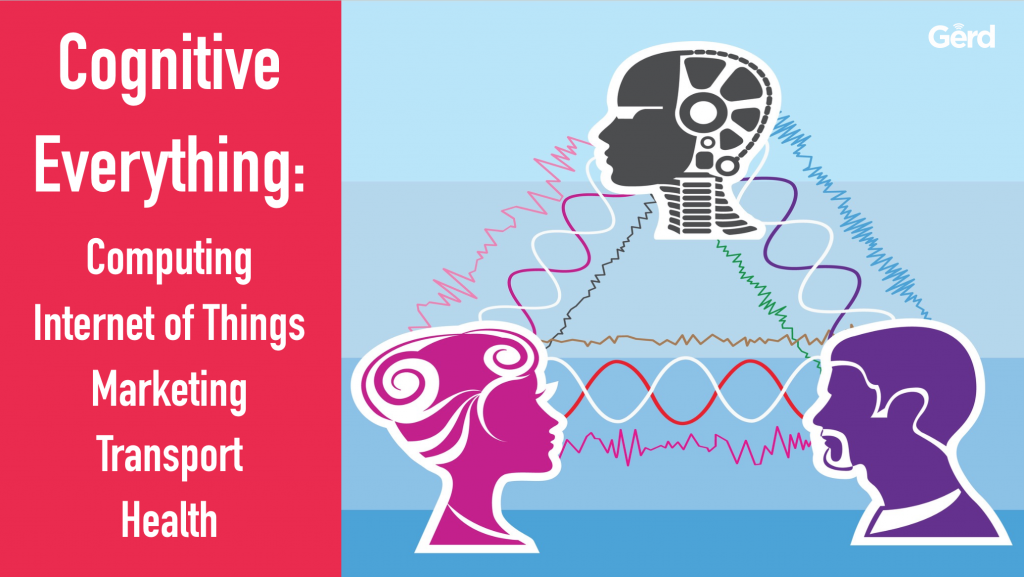 Most technologies, software and hardware alike, are not only becoming much faster and cheaper but also increasingly intelligent – I have recently coined the neologism ‘intelligization’ to describe this trend. Almost nothing will remain dumb. The spectrum of rapid recent advances runs the gamut from the kind of narrow intelligence it takes for a computer to win against a chess master, to the advent of thinking machines and IBM’s neuromorphic chips (i.e. chips that attempt to mirror human neural networks) and their ambitious cognitive computing initiative. Buzzwords such as AI and Deep Learning are already making the headlines every single day, and this is just the tip of the iceberg. Looking at the investments by the leading venture capitalists and funds, AI has already become a top priority in Silicon Valley and in China – often a certain sign of what’s to come for all of us.

The future of work and jobs: moving towards the plastic (fka ‘right’) brain 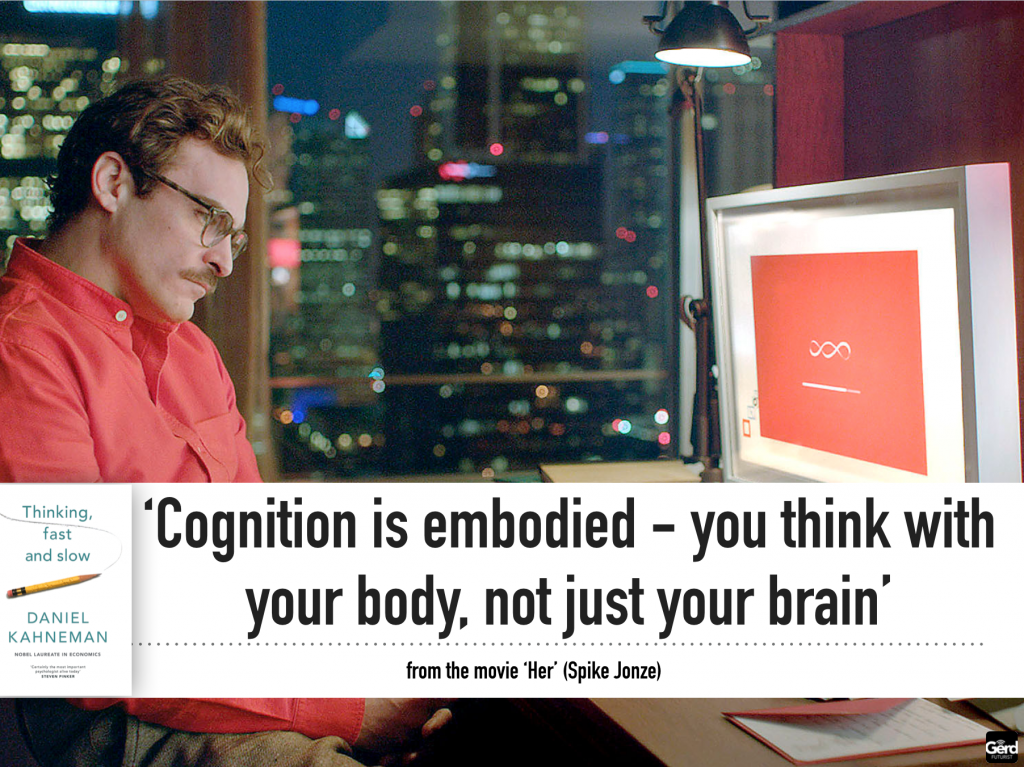 We now have to face the distinct possibility that as machines become infinitely more capable of doing what we used to do, particularly with our more mathematical or logical ‘left brain’ capabilities (to use a rather outdated term), we will probably need to becomemore human and increasingly less like machines, in order to remain valuable. Ironically, this is completely the opposite of what a lot of  traditional education schemes (such as MBAs?) entailed e.g. avoiding emotions, limiting imagination, and sticking to schedules and plans. If you believe (as I do) that non-algorithmic i.e. emotional, (sub)conscious or even holistic and kind of spiritual factors such as trust, purpose, ethics, and values  are and will remain at the core of human societies in the foreseeable future, this will clearly put a much stronger emphasis on truly human cognition, i.e. what Daniel Kahnemann means when he says that ‘cognition is embodied – we think with our bodies not our brains’ . Education, training and learning will be changed forever as a consequence. And what if – in the near future – many routine business activities or operations are actually handled by algorithms and intelligent agents acting on our behalf? In sectors such as procurement, logistics, or telecommunications network management it may very well be possible to have intelligent, self-learning software, and reasoning robots take care of 50-90 percent of the frequent and repetitive tasks, within a decade from today. This would obviously lead to huge increases in efficiency and potentially massive costs savings, bringing much lower prices for consumers but would also bring a crushing commoditization for those companies (and people) that currently provide these services. Clearly, human operators cannot and should not compete here – the only way for us is to move up the food-chain, i.e. to do the work above the API(application program interface).

To wrap up this story, let’s remember this wisdom:  “The best way to predict the future is to create it” (often attributed to Peter Drucker, Abraham Lincoln and Alan Kay).  Thanks for reading, and I look forward to your comments.

And of course… my final recommendation: 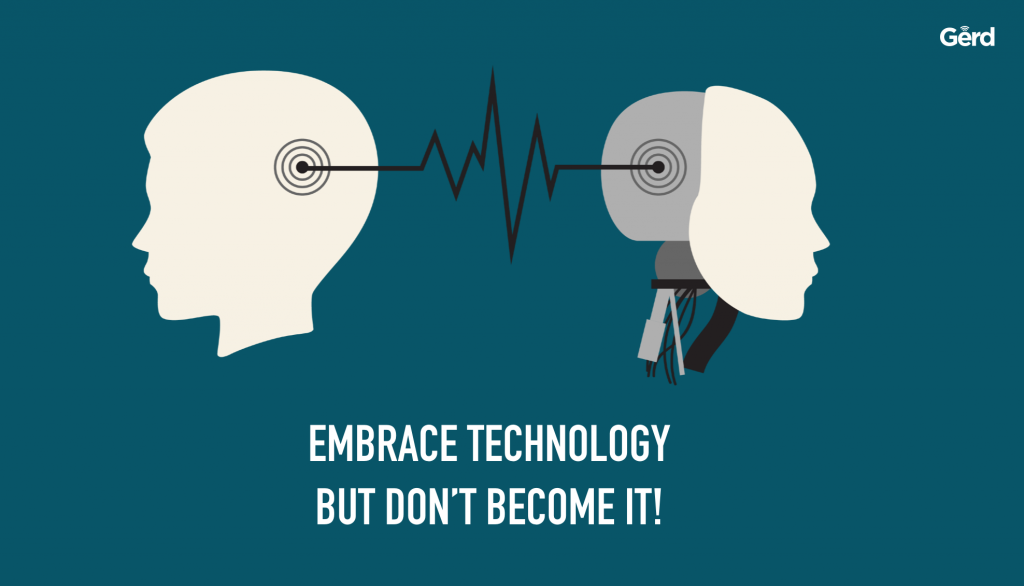 In the words of American poet John Berryman, “the possibility that has been overlooked is the future”. Most of us are far too busy coping with present challenges to explore the future in any depth – and when we do our own cravings and fears often run away with us, resulting in utopias or dystopias that are not very helpful in terms of planning and decisions. Today’s professionals, leaders and their organisations need a dedicated, passionate long-term understanding of the future if they are to successfully navigate the exponential waves of change. For countless individuals and organizations that intelligence is called Gerd Leonhard. View all posts by Gerd Leonhard