Who Should Control Artificial Intelligence?

Great interview by Jack Clark on Bloomberg with Google’s AI wonder boy Demis Hassabis, on using artificial intelligence on everything from climate change to aging.

Demis was the co-founder and CEO of DeepMind, a neuroscience-inspired AI company, bought by Google in Jan 2014. He is now Vice President of Engineering at Google DeepMind and leads Google’s general AI efforts.

When asked in the interview about after having created a super intelligence AI and what should happen next, he answers:

I think it should be donated to the United Nations. We’ve talked about this a lot. Actually Eric Schmidt [executive chairman of Alphabet, Google’s parent] has mentioned this. We’ve talked to him. We think that AI has to be used for the benefit of everyone. It should be used in a transparent way, and we should build it in an open way, which we’ve been doing with publishing everything we write. There should be scrutiny and checks and balances on that.

I think ultimately the control of this technology should belong to the world, and we need to think about how that’s done. Certainly, I think the benefits of it should accrue to everyone. Again, there are some very tricky questions there and difficult things to go through, but certainly that’s our belief of where things should go.

Read what Gerd Leonhard has to say about the AI topic in his latest book Technology Vs. Humanity:

Our ethics—and many of our laws and regulations as well—are still based on a world that advances linearly and on “what used to work” before we reached the pivot point on the exponential curve. Ever since the Internet became a significant commercial force, we seem to have focused in the main on exploiting its economic and commercial promises. We have spent way too little time considering its impact on our values and ethics— and this is finally becoming apparent as we enter the age of artificial intelligence (AI), robotics, and human genome editing.

To help fuel the debate on the best way forward, Gerd has framed nine principles in Technology Vs. Humanity. They capture the essence of the core arguments he has presented through the pages of his book. 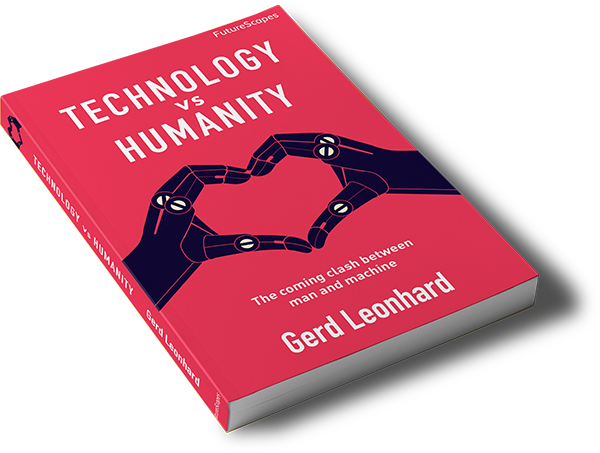 Pre-order the book on Fast Future Publishing (offer of 20% off retail price valid until 8 September 2016).